Those who have been following Dr. Stone will know that Senku’s father, Byakuya, was an astronaut who was on board the International Space Station when the petrifaction of the Earth happened. As a result, he and five other people remained alive… as did a robot.

In this one-off prequel manga (story and art by Boichi) the opening chapter sees Byakuya and Senku back on Earth five years prior to the story, with Byakuya showing off a robot that he has asked to be designed for him while he was on the ISS. Senku is impressed by it, and the robot, named Rei (the original plan was to make the robot look female, but Rei is just spherical), picks up on Senku’s scientific knowledge.

However, when everyone turns to stone, the crew of the ISS have to work together to return to Earth and preserve humanity. Those who have read the manga and/or seen the anime will know what happened to the crew: the six human crew members managed to land on a remote island, from which they were able to produce a new human population, whose descendants Senku later meets 3,700 years in the future.

Rei, though, does not go down with them. Rei is left behind on the ISS. When Rei asks if Byakuya will return, he says yes, knowing he never will and that the ISS will only last a few months before it burns up in Earth’s atmosphere. Thus, the humans use the last remaining fuel on the space station to return home. Rei meanwhile waits patiently for Byakuya to return, because while it may have scientific knowledge, the robot was not programmed with any form of common sense or an understanding of humans. Therefore, Rei does not know how long humans live for.

As a result, this manga is not really about Byakuya that much. It is about Rei the robot doing its best to keep the ISS working so that it can meet Byakuya again, tragically unaware that Byakuya will never return. While we do see Byakuya on Earth raising children on the island and growing old, the main story of the manga is actually Rei’s efforts to keep itself and the ISS operational.

Going into this manga, I wasn’t expecting much. It was hard to imagine what new information could be extracted, it being a prequel, that would be vital to the main story. When Rei is first introduced, it seems a bit gimmicky and it feels odd that this robot was not mentioned in the original Dr. Stone manga. Things change though when Byakuya and Rei become separated. Rei’s continued efforts to keep everything going are at times thrilling, at times funny, and at times moving.

It is thrilling because Rei goes to such extraordinary length to keep itself alive. For example, when needing to find a source of water, Rei locates a comet, but has to travel for three years in order to reach it. Thus not only does Rei have to make sure the ISS runs on minimal power while it is away, but Rei ends up making its own spaceship out of spacesuits in order to travel and retrieve part of the comet.

It is funny because of some of the odder bits of humour that come about. Rei is constantly panicking because of the various problems it faces. One of these is Rei’s aging. Rei has to constantly upgrade its parts as it gets older, being originally powered by old smartphone components. So when Rei is able to upgrade, using what few parts there are on the ISS, it’s able to achieve a 1,000 Smartphone Brain, with 1,000 SP (Smartphone Points), in a deliberate reference to Dragonball Z, complete with a drawing of a chibi Vegeta with a breaking scouter.

It is moving for the clear reason that Rei’s efforts to meet Byakuya again are all in vain – on the surface, at least. However, there are moments of pathos throughout this part of the story. Rei creates a bright light to shine down upon the spot on Earth that Byakuya aimed for, in the hope it will attract him to come back. The scene in which Byakuya does see the light is one of the most heartbreaking in the story.

We do see, though, Rei and the ISS surviving for 3,700 years, so this leads to a new scenario where we could have a point in the main Dr. Stone manga of Rei maybe meeting Senku. We don’t know yet if this will happen, but it would be great to see, as it would tie the stories together.

In terms of production, Reboot uses the same translator (Caleb Cook) and designer (Julian Robinson) as the original, although a different letterer (Brandon Bovia) and editor (Alexei Kirsch). However, I see no difference in quality between the two works.

Read a free extract from the manga at the publisher’s website here. 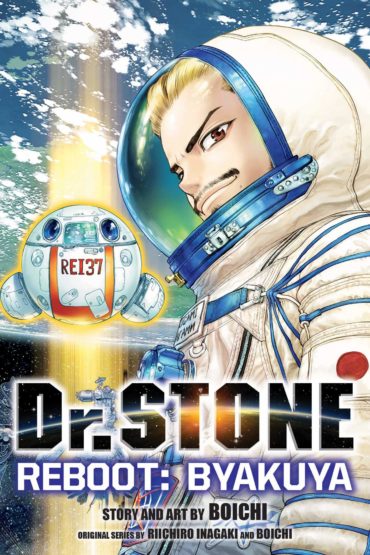