It has been a few months now since Vertical started down the path of publishing the latest series of Monogatari books, Owarimonogatari. Today I’m here to check out Part 2 and find out what Araragi and co are facing now.

Our story begins with Araragi summoning Kanbaru to the abandoned school Meme Oshino once called home. Araragi owes a favour to Gaen Izuko and she’s tasked him with bringing Kanbaru to her (Kanbaru being Araragi’s junior in high school and the girl who has a monkey’s paw).

Araragi isn’t thrilled by the idea of bringing Kanbaru into his world of aberrations and those who deal with them, but he’s reluctantly going along with it. However, once Kanbaru arrives, the two are attacked by a mysterious suit of armour!

After a fierce battle, the armour disappears, but not before leaving Araragi with a message for Shinobu. This new enemy wants the Kokorowatari sword Shinobu wields, but Araragi has suspicions that there is more at stake here than just the legendary blade.  Now Araragi has to fulfil his promise with Gaen while also protecting Kanbaru from the new supernatural challenge he’s gotten himself wrapped up in. Is there ever a quiet moment for our hero?

I must admit that Owarimonogatari Part 2 confused me initially since it doesn’t take place right after Owarimonogatari Part 1. Instead, this story takes place alongside Nekomonogatari White and just after Onimonogatari, which is not obvious if you read these two at release in 2018 and, like me, had forgotten things.

The only really important thing to remember is that in this volume of Owarimonogatari, Araragi and Shinobu are not bound together like they usually are. Their link is severed and so Araragi is even more of a normal human than usual, having lost even his small stock of vampire powers.

Thematically the loss of Shinobu fits well with the set-up from Tsukimonogatari, where Araragi was told he could no longer rely on or use his powers. Although Owarimonogatari Part 2 takes place before that narratively, it’s still very much in keeping with what’s been happening to our protagonist recently.

The issue I have with Owarimonogatari Part 2 is that although the story being told is a good one, it takes a while to get going. It felt like a long book, but admittedly a lot of that is because of Kanbaru’s involvement. Kanbaru exists as a character to be Araragi’s plucky young junior who idolises both him and his girlfriend Senjougahara. She takes any opportunity to make suggestive and perverted jokes with Araragi, which unfortunately I found especially annoying in this book.

Author NISIOISIN is certainly no stranger to writing this type of content, but I feel like other characters can pull these jokes off better than Kanbaru can. It’s not even that they’re bad jokes, they’re just excessive and there are only so many times I can read about Kanbaru wanting to sleep with Araragi when I actively don’t like her character. At least it looks like Owarimonogatari Part 3 will be more interesting as it promises to finally reveal who Ougi Ishino really is and what they’ve been up to all this time.

Owarimonogatari Part 2 comes to the West thanks to Vertical and has been translated by Ko Ransom. The translation reads well with no issues to speak of. The third and final entry in Owarimonogatari is currently scheduled for release at the end of September.

Owarimonogatari Part 2 offers an interesting story set in the middle of the series timeline. If you’re not a Kanbaru fan then you may find yourself lacking in enthusiasm for the first half of the book, but the final payoff certainly makes it worth reading to the end. 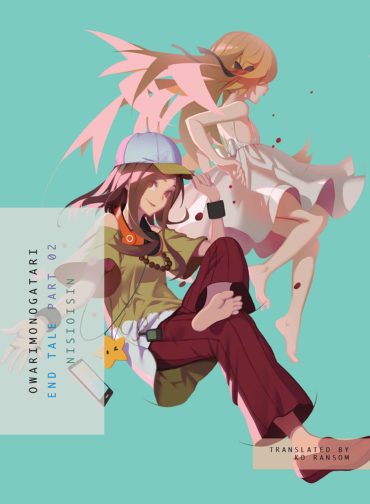