The long-awaited final chapter in Hideaki Anno’s long-awaited “Rebuild of Evangelion” series, Evangelion 3.0+1.0: Thrice Upon a Time, was released in cinemas in Japan this March and now, Variety are reporting that international rights to the film have been snapped up by Amazon, who will debut the film on their Amazon Prime Video service worldwide (excluding Japan) on 13th August 2021.

In the aftermath of the Fourth Impact, stranded without their Evangelions, Shinji, Asuka, and Rei find refuge in one of the rare pockets of humanity that still exist on the ruined planet Earth. There, each of them live a life far different from their days as an Evangelion pilot. However, the danger to the world is far from over. A new impact is looming on the horizon—one that will prove to be the true end of Evangelion.

Evangelion 3.0+1.0 has had a rocky production since it was first announced in 2008 as an intended simultaneous release with its predecessor, which itself eventually released in 2012. Known back then under the title Evangelion: Final, the film later moved to a planned 2015 release, due to Hideaki Anno’s mental health and commitments to other films including Shin Godzilla. Production finally restarted in 2016 for a planned 2020 release, but was delayed further by the coronavirus pandemic, before finally releasing in Japan in March 2021. The film released at the top of the Japanese box office, breaking Japan’s record for the highest IMAX opening day earnings.

Evangelion 3.0+1.0 Thrice Upon a Time will be dubbed into 10 different languages, with subtitles in 28. The release will also be accompanied by the previous three films in Anno’s series, Evangelion 1.11 You Are (Not) Alone, 2.22 You Can (Not) Advance, and 3.33 You Can (Not) Redo. It is not currently known whether these re-releases will include the original Funimation-produced English dubs, new dubs recorded with the cast seen on Netflix, or another brand new cast.

The first three films were released on home video in the United Kingdom by Manga UK (now Funimation UK), with the first also being briefly re-released by Anime Limited. The original television series and its related films, including The End of Evangelion, were licensed and released by Netflix in 2019, with Anime Limited announcing plans to release the series on home video and Death(true)2 and The End of Evangelion in cinemas. 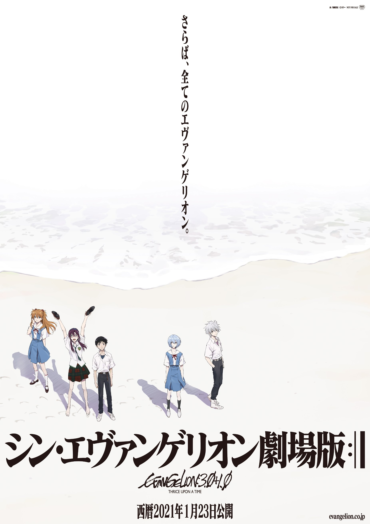 We’ve rounded up a selection of COMPLETELY LEGAL AND FREE anime and manga to help YOU survive the lockdown.